Aikido classes run a range of physical activity from stretches to cycles of throws and falls. In short, one will want to dress for a workout and expect to sweat. For Argonne Aikido Club classes, wearing a Gi is encouraged–but not required. A Judogi is optimal because it is designed for grappling and rolling, but any style of gi is probably going to be good.

There is a locker room with showers just down the hall from our practice room, so participants often bring clothes with them and change there.

Generally, one begins practicing Aikido with a white belt. Not only does this respect the Aikido tradition, but it is a practical mechanism for communicating that one is new to the art.

So, the rule of thumb is, if one has been awarded a colored rank belt (or of course a black belt) by an Aikido school affiliated with Hombu Dojo–the International “Mother House” of Aikido in Japan–then one will want to wear that belt. Otherwise, a white belt is the way to go. 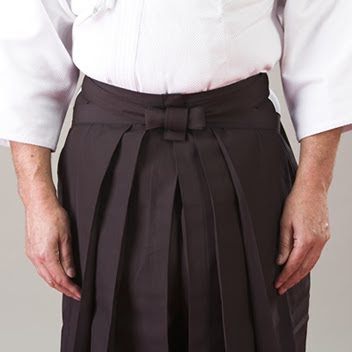 A signature feature of the Aikido uniform is the Hakama. Aikido convention universally expects all Yudansha (black belts) to wear hakama when practicing. Some schools–particularly those associated with the United States Aikido Federation (USAF)–encourage women of all ranks to wear hakama as well. However, Argonne Aikido Club is affiliated with Aikido Association of America which does not advocate donning the hakama until one receives a black belt–regardless of gender.