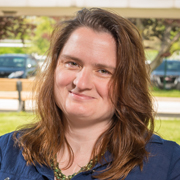 I never considered the word “research” to be gendered. Yet, there on a big projected PowerPoint slide under the heading “Male Associated Words” was “research,” along with related terms data, result, finding, publish, among others.

The setting was a workshop called “Branding Yourself: Developing Your Communications Strategy” that covered job-seeking topics from CV and resume writing to the benefits (and risks) of social media to how to coach your letter-writers on writing good recommendations. Co-presenter Cindy Simpson, Chief Business Development Officer for the Association for Women In Science (AWIS), summarized research findings that compared word usage in letters of recommendation for female versus male job candidates. It was found that letters for male candidates include “standout” words—brilliant, unparalleled, superb—more often than letters for female candidates. Letters for male candidates also tend to describe research abilities and results more often than letters for female candidates, which tend to emphasize work ethic (“grindstone” words) and social/citizenship qualities (“teaching” words).

This kernel of implicit bias knowledge wasn’t the only thing I learned at the National Postdoctoral Association (NPA) Annual Meeting, held in Baltimore from March 13-15, 2015. This year’s conference had several engaging sessions on diversity and inclusion and the importance of mentoring in career advancement. Many were directly relevant to women, which is quite timely as we celebrate Women’s History Month. Presented here are a few nuggets I learned from my colleagues and distinguished presenters.

Kristene “Tina” Henne is Argonne’s Postdoctoral Program Lead. In this role, she enables early-career Ph.D. scientists and engineers to kickstart their careers by facilitating the postdoc appointment process, postdoc career development, and advising the Postdoctoral Society of Argonne.

Henne has a Ph.D. in biological sciences from Purdue University, a B.S. in biology from Governors State University, and an A.A.S. in radiography from Kankakee Community College. She came to Argonne as a postdoctoral researcher in the Biosciences Division in 2009 and became a program coordinator in 2011.

Kristene “Tina” Henne is Argonne’s Postdoctoral Program Lead for the Argonne Leadership Institute. In this role, she facilitates the postdoc appointment process, postdoc career development, mentoring, advises the Postdoctoral Society of Argonne and serves as a navigator for postdoctoral issues.
View all posts by Kristene Henne →
This entry was posted in For Mentees, For Mentors, For Postdocs. Bookmark the permalink.