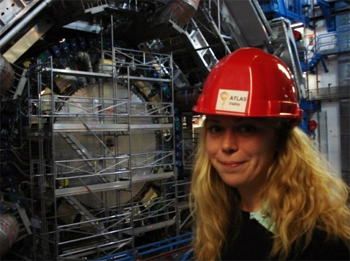 Lily Asquith works in the High Energy Physics (HEP) Division. She completed her Ph.D. at the University College London and moved last August to Argonne for her first postdoc position. She currently is working on jet physics and boosted particle searches using the ATLAS experiment at CERN. Her research focuses on the elusive Higgs Boson.

“There is so much going on in the HEP group at Argonne, barely a day goes by when I don’t hear about something I find incredible,” says Asquith.

Asquith also occasionally blogs about her research for the Guardian in the United Kingdom. You can locate her blogs here.

“I am not good at accepting abstract ideas unless I can explain them simply to myself,” says Asquith. Her process for writing out her thoughts and ideas sometimes makes good material for a blog post.

She also finds inspiration for her posts from her daughter. “I have a 12-year-old daughter who asks me questions. If I hesitate in my answer or bore her in the first 20 seconds of it, then I have had it,” says Asquith.

While Asquith is a novice when it comes to blogging she follows a good approach. She crafts her posts to appeal to the general populace, especially people with no background in particle physics. It takes her only 10 to 30 minutes to research and write a post. She writes about topics that she personally likes to read about in the field of particle physics or would like to read if she was just starting out her career.

Her writing concentrates on several key points in communicating science to the general public. First, she uses a sense of humor, popular culture and liberal arts references to illustrate her ideas and bring the subject to her audience. Second, Asquith is familiar with the current literature on her subject matter and the how it is reported in the popular press. Finally, she revisits seminal works and research in particle physics and makes it accessible to the average person. “I think my only rule is that there has to be at least one point in a post that makes the reader (me) smile,” says Asquith.

Her advice is to think about what you would like to read before communicating your topic, rather than what you want to tell your audience. She also recommends an organic approach to handling comments from readers.

“When I first blogged I tried to respond to the comments, but I found it was quite time consuming and not very rewarding. It is nice to have comments. The best outcome is when the readers discuss between themselves, because they often have really good ways of explaining things to one another.”