This article originally appeared in the Postdoc Journal Newsletter in April 2012. 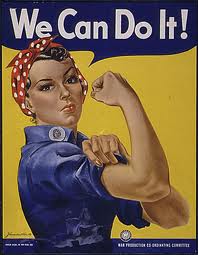 March was Women’s History Month. Argonne celebrated this month by featuring a woman innovator each day on Inside Argonne. The official observance of Women’s History Month has evolved over time from “International Women’s Day” in the early 1900s, to a week in 1980, to its current status as a “month” since 1992. (For an eloquent account of the origins of this month, see the 2010 Focal Point Blog from past Diversity Officer, Micheal D. Butts).

This month was kicked off with a Focal Point article by current Diversity Program Officer, Gloria Woods, which highlighted the athletic and scientific achievements of our very own Cindy Garrett Rock (FMS-OPM).

Rock’s devotion and discipline in both science and sports is the perfect example of how both hard work and team work can lead to great things. As Gloria points out, March is commonly associated with the March Madness that is the NCAA collegiate basketball tournament. While sports enthusiasts will tune in to cheer on their favorite teams, middle school girls recently tuned in to Argonne to gain some inspiration from our women science and engineer role models. Several postdocs were among those who gave of their time and shared their stories of achievement at the 2012 Introduce a Girl to Engineering Day (IGED).

IGED dates back to 2002, when Deborah Quock, Kirsten Laurin-Lovitz and Maryka Bhattacharyya spearheaded the program to introduce girls to the engineering profession. The motivation, planning and implementation of the first IGED were published by Quock, Laurin-Kovitz and Bhattacharyya in the proceedings of the 2003 Women in Engineering Programs and Advocates Network (WEPAN) conference.

The program has become a much-sought after experience for middle school girls in the Chicago area. Not only are the participants exposed to engineering, but they also gain an appreciation for STEM disciplines, in general. Jennifer Steeb, CSE postdoc, together with J’Tia Taylor (NE), a Nonproliferation Technical Specialist, gave an energizing interactive presentation on the subtleties of engineering and science, touching on all disciplines from Biology to Physics.

Steeb and Taylor always do a terrific job at getting the crowd warmed up and eager to learn more! Jennifer spoke of her experiences growing up as a girl in science and the path she took to becoming a scientist. By highlighting what she likes to do with the little free time she has, she showed the girls that it is okay to be smart AND cool! Many other postdocs served as mentors to the young ladies who participated in this full-day event.

Several others gave tours of facilities and held scientific demonstrations. The testimonials following IGED show how volunteering for these events can be mutually beneficial to the girls and the staff. 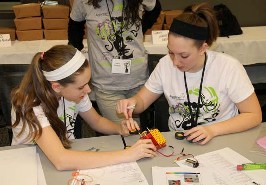 Laura Zamboni (MCS) recounted how great it felt to be told that she is “awesome” by her mentees. Sunshine Silver (CSE) also commented on how important it is to give back, considering the positive role models that influenced her decision to become a woman in science. I asked Laura and Sunshine to share their thoughts on their personal journeys and what drives them to mentor young women interested in careers in science and engineering.

Here’s what they had to say:

Why is it important to you to participate in IGED and SCSW?

In my experience, I have found that young women generally need more encouragement to take the advanced math and science classes. Many seem to lack the self confidence to continue on with the most difficult classes. It can also be challenging to find a mentor, especially a female mentor, at the age when you’re discerning possible career fields.

What were your impressions of science growing up?

Even at an early age, it was made clear to me that science was only for the smart people. In high school I became very interested in chemistry and thought perhaps I would pursue a chemistry degree in college. I was told by a family member, who happened to be a pharmacist, that I was not smart enough to pass organic chemistry. Because I believed him, I took up another major in college and after two years of missing chemistry, I transferred schools and switched my major.

How has your experience as a woman in science been?

For the most part, my experience as a woman in science has been positive. There have definitely been some difficult times, but I think everyone experiences difficulties in their careers. I find the most challenging part of being a woman in science is the career-life balance, as many other women do. It is extremely challenging juggling multiple roles and I often feel like I’m failing at all of them!

Name one role model who has made a positive impact in your career thus far.

I have been lucky to have several role models who have made a positive impact in my career at this point. I had a fantastic science teacher in high school that encouraged me to take advanced math and science classes and really sparked my interest in chemistry. In college and graduate school, I had several professors who encouraged me to pursue my interests in science and in my personal life. I have also found several researchers at the lab who I admire for their research accomplishments as well as their personal life decisions. 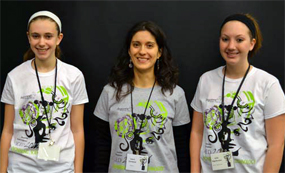 Why is it important to you to participate in IGED and SCSW?

It was kind of shocking for me to know young girls (and boys) so early determine their future by choosing or not to take certain courses. It is a pleasure to show the beauty of science and share my passion.

Spending a day dwelling into that passion also helped me overcoming subsequent moments of stress and intense workload.

What were your impressions of science growing up?

I have always loved science, since I was often the first finishing math exercises in the elementary school. Or looking forward to hear more physics during high school. What can I say? I am a scientist.

How has your experience as a woman in science been?

It has been pretty good. I think part of it depends on the relatively higher percentage of women in my field (climate) compared to others.  On the other hand, it did not feel great when at Argonne I was the only woman who got the Computational Postdoctoral Fellowship and I found myself in a room with around men at the welcoming breakfast. I thought I was either really tough, really crazy or a fish out of water. Luckily, I soon met some other great fellows with whom gender does not matter [for the record, they are Joe Bernstein (CELS) and John Murphy (CELS)].

Name one role model who has made a positive impact in your career thus far.

My physics professor in high school. I have loved the rational, logic thinking and physics of course, since then. Gender did not matter at all.

Special thanks to all the postdocs who gave their time to participate in IGED and thanks in advance to those who will be participating in Science Careers in Search of Women on Thursday, April 19. And a heartfelt thanks goes out to all of our women role models in WIST for providing these opportunities to inspire the next generation of WISTers!

I leave you with a quote from President Obama on the importance of women in society:

With passion and courage, women have taught us that when we band together to advocate for our highest ideals, we can advance our common well-being and strengthen the fabric of our nation.— President Barack Obama

Well said, Mr. President. For more on the Administrations Council on Women and Girls visit http://www.whitehouse.gov/administration/eop/cwg.

Kristene “Tina” Henne (CEPA) came to Argonne as a postdoctoral appointee in the Biosciences Division in 2009. Her research in the Protein Mapping Group focused on the proteomic response of Anaeromyxobacter dehalogenans to metals.

While a postdoc, she was active in the Postdoctoral Society of Argonne, volunteered for events such as the Middle School Science Bowl, SCSW, IGED and the AABC Science Education and Cultural Arts Day. She also mentored a summer undergraduate student intern. Dr. Henne recently became the Postdoctoral Program Coordinator at Argonne.

She received her Ph.D. in Biological Sciences, with an emphasis on Microbiology and Molecular Genetics in January 2008 at Purdue University, performing half of her dissertation work as a Guest Graduate Researcher at Argonne.

Kristene “Tina” Henne is Argonne’s Postdoctoral Program Lead for the Argonne Leadership Institute. In this role, she facilitates the postdoc appointment process, postdoc career development, mentoring, advises the Postdoctoral Society of Argonne and serves as a navigator for postdoctoral issues.
View all posts by Kristene Henne →
This entry was posted in Communicating Science and tagged Laura Zamboni, science careers in search of women, tina henne, Women's History Month. Bookmark the permalink.