A model airplane club has existed in various forms at Argonne National Laboratory since about 1965. The members of the old Argonne Model Aircraft Club picked out a site for a flying field on South Bluff road and maintained it themselves, bringing mowers to the field in the trunks of their cars. The original flying field was inside Argonne’s outer security fence in the South West area of the site. Flying during the noon lunch break was common practice since it was only a few minutes’ drive to the easily accessible field from inside Argonne through an open gate in the inner security fence.

Some years later Argonne reduced its land area and gave a large parcel to the Forest Preserve District of DuPage County. This included the land between the outer and inner security fences where the Argonne Model Aircraft Club field was located. The field therefore found itself outside the new Argonne perimeter security fence, and the gate leading to it was locked for security reasons. Via an agreement with the DuPage Forest Preserve District, the Woodland Aero Modelers R/C Club took over the use and maintenance of the field. They have access to it through a locked gate on South Bluff road, (the old Argonne outer security fence). This gate was deemed necessary to protect the adjacent cemetery.

Members of the Woodland Aero Modelers R/C Club have keys to the gate and must re-lock it upon entry to or exit from the field. They thus have exclusive use of the field. These changes made lunchtime access to that field inconvenient for Argonne members, some of whom joined the Woodland Aero Modelers R/C Club. Those that had a key didn’t have enough time to drive around to the South Bluff Road gate, unlock it, drive through, lock it, drive to the field, park, walk out to the field, set up and fly, and then repeat all the steps in the reverse order to get back to work before the lunchtime break ended.

As a result, interest in the Argonne Model Aircraft Club decreased during the following years to the point where it no longer existed. The old Argonne club members left the laboratory, mostly through retirement.

In 1984 there was a renewed interest in R/C model aircraft at Argonne. Several people in the Physics Division had purchased equipment and wanted to learn to fly. They decided to pursue a new field on the present Argonne site for the enjoyment of Argonne personnel.

With the cooperation of Laboratory management they were able to secure a flying site located on the North East corner of Bluff Road and Railroad Avenue adjacent to the waste treatment plant. They started flying from this field in 1984. For 11 years, Argonne personnel from many different Divisions have delighted in flying at this field. Many people have enjoyed the camaraderie of other model aircraft enthusiasts and the convenient access to the site during the lunch break.

This field presented some interesting challenges to R/C flyers. The landing and take-off area was about 200′ by 400′. There were either trees or power lines located on three sides. A typical approach and landing meant: gliding down; leveling out just above the power lines; dropping the nose of the plane rapidly after clearing the lines; and then flaring sharply for a smooth landing. One landing approach from the south was to come down “electric alley”. This was a pair of parallel power lines spaced about 30′ apart. Only a few people used this approach since the power line poles and associated guy wires claimed several aircraft.

During all this time there has been no formal model aircraft club at Argonne. Everyone involved felt that a very informal organization worked best. Nobody wanted to be involved with the obligations of running a formal club.

In June, 1995, the group was informed by DOE Argonne Area Office personnel that they had to relocate the field. The waste-treatment plant just east of the runways was to be renovated and expanded. Construction was to start in September, 1995.

After scouting the entire laboratory and again working with Laboratory management, a viable site was found north of the original site, near a large oak tree on the east side of Tech Road. The new site is bordered by Tech Road on the west, Eastwood Drive on the south, Central Drive on the east, and the Eastwood Extension on the north. Approval for the placement of the new field at this location was received in late summer of 1995. The Argonne Grounds personnel chopped down the high weeds and flying started off the site shortly thereafter, even though the terrain was very rough. In October, 1995, the final touches were finished, and flying began in earnest.

Argonne safety personnel reviewed the R/C operations and requested that an official club be formed to monitor the site. The Argonne Radio Control Model Aircraft Club was then formed on April 16, 1996. 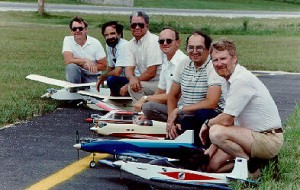