In 2000, Argonne’s 8 member River-to-River Relay team (under the name of 4 does and 4 bucks again took part in this 80 mile run from the Mississippi to the Ohio River. This year, there are no pictures at the Ohio river, only at the finish line in the dark! We were given a late starting time and finished with Boh, chased by farm dogs and bats, coming across the finish line using a flashlight. This year we see the many passes made on the course from the Mississippi to the Ohio. Somehow the team was alternately female and male! Previous pictures are in the old pictures section. May 23, 2000, with pictures from Corrie. 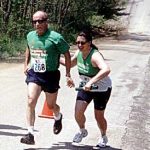 And finally we come around to the transfer from our number 8 runner Boh to our number one runner, Corrie 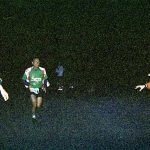 Here we see Boh coming in to the finish line. One can almost imagine the bats and farmdogs in the background!

There are fascinating sights along the way. There are the bikers for Jesus and here we have the transfer handled by the “Prairie Chickens” a team that got confused and didn’t get their entry in in time. 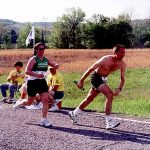 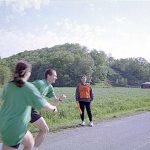 Here we have the interchange of Corrie to John between the first and second leg. As you can tell from comparing the attire of the same two runners in this and the next picture, which was taken later in the race, things were getting hot! 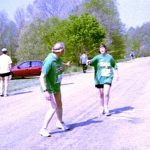 Here we have the transfer from Debbie to Chuck. Needless to say, I didn’t take the picture! (Altho, at the speed I was running, I might have had time and not really held up our time much at all). 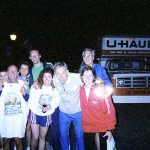 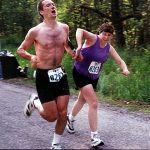 John then handed off to his wife Debbie. She looks all ready to go but John is beat! 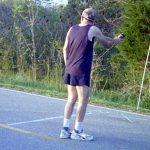 While Laurie didn’t need incentive to run all out, Karl decided to give her some at the end of her run. Booze, money (and I think something else but I am too old to remember) make excellent incentives, and as Argonne employees, money or stock options were out!

What has become a tradition with the River to River team is the handoff of Karl to Laura (and the suspense of whether Laura will be at the start line for the transfer!). 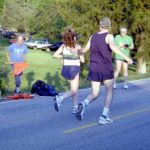 There are no pictures of the Chuck to Laurie transfer. To make up for it, we have an extra Laurie to Karl transfer with Chuck (and camera) in the background 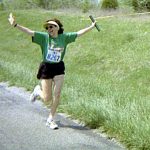 Exulting at being in time for the interchange, Laura shows her enthusiasm! 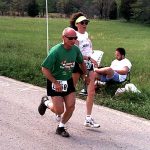 Now we show a transfer between the IPNS contingent Laura (former) and Boh. 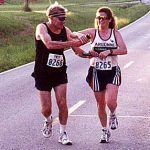 This exchange shows the transfer from Laurie to Karl of the baton (and the back transfer of beer). This was probably the happiest that Karl was going to look for a while — he was heading off to do the notorious 3 rd leg of runner 6. 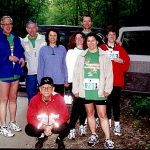