Carolyn and Helena recently took on the daunting task of communicating science to one of our toughest audiences — kids!

We asked them to share their experience and what they learned about translating science to a broader audience. 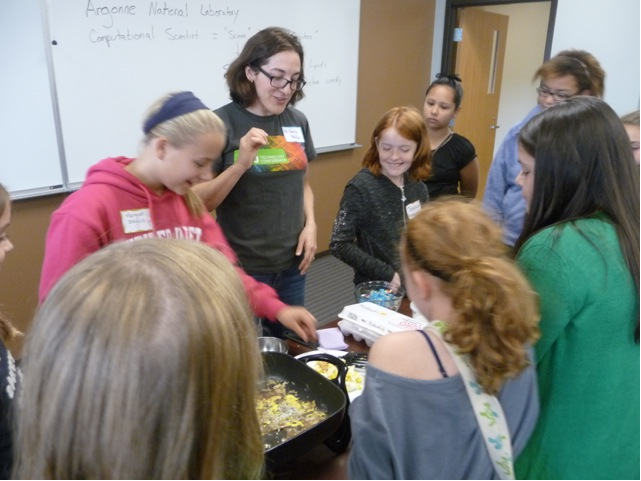 Carolyn took part in “Girls + Math + Science = Success,” a science conference held at Moraine Valley Community College for 5th grade girls from elementary schools in the area. The event sought out women role models who actively worked in Science and Technology to organize a hands-on activity for the girls that would showcase what researchers do.

Carolyn acted as a last minute replacement for someone who could not make it.  “With a week’s notice, I was asked if I could create a 30 minute hands-on presentation for 5th grade girls that introduced them to my profession,” says Carolyn. “With that kind of challenge, how could I say no?”

Carolyn developed a module called “Eggs-traordinary Liquids” which posed the question “Why do eggs go from liquid to solid when you apply heat, while an ice cube goes from solid to liquid to gas?” This culinary experiment involved frying eggs and examining what happens to an egg if one lets it dry out without applying heat. “I also used small balls of yarn, to discuss the denaturing of proteins and illustrate how they get tangled when they are denatured,” says Carolyn. 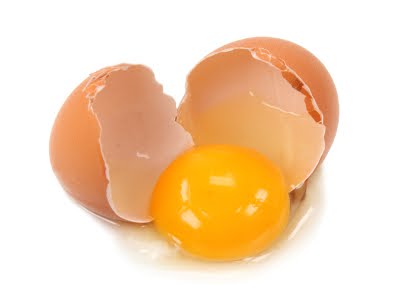 One of the challenges Carolyn encountered was thinking through the language and terms she would use to discuss the processes underway. Since the group was 5th graders she chose vocabulary that they were familiar with from their science classes. “At this age some of the girls have been introduced to molecules, but not atoms,” says Carolyn. She approached the experiment and discussion with first having the young women researchers explain to her what they were learning in their science classes.

This way she could develop a feel of what they were learning. “I feel the ideas and the approach to science are much more important to impart to young people than the vocabulary,” says Carolyn. She wanted the group to understand that being a scientist means never losing the desire to ask questions and try new things. She was happy the group had curiosity and was excited to explore new possibilities.

Carolyn recommends not using PowerPoint presentations, since students will find this boring. Carolyn decided to have the students join her in the experiment and gave them tasks to perform as she walked them through the process. She also advises to be ready to answer questions and to engage students with looking up answers. “Be prepared to say, ‘I don’t know the answer to that question.  Let’s look it up,’” says Carolyn. 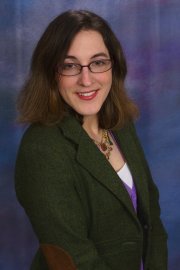 Carolyn Phillips (MCS) is an Aneesur Rahman Postdoctoral Fellow at Argonne. She works on developing algorithms for feature recognition, feature tracking and design space-mapping of self-organizing complex adaptive materials such as complex crystals and type-II superconductors. She received her Ph.D. from the University of Michigan in Applied Physics and Scientific Computing and holds two M.S. degrees in Mechanical Engineering from MIT and the Naval Postgraduate School and a B.S. in Mathematics. 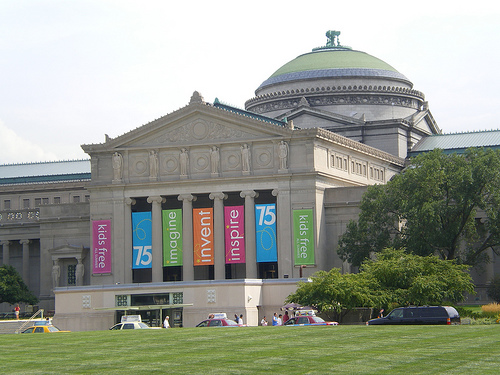 Helena participated as a mentor at the NextGen 2013 Conference, held at the Museum of Science and Industry. The conference was sponsored by the Illinois Science and Technology Coalition and the R&D STEM Learning Exchange and hosted by the MSI and the Golden Apple Science Program.

The NextGen conferences are designed to inspire and support the next generation of scientists. This year, 175 students from local high schools and more than 30 Science, Technology, Engineering and Mathematics (STEM) professionals attended. David Schmitz from the University of Chicago’s Physics Department was the keynote speaker and gave a talk on neutrino physics and the building blocks of the universe.

“The students were buzzing with excitement,” says Helena, “They shared their own research experiences in small groups, facilitated by STEM professionals.”  The students had the opportunity to explore some of the Museum’s exhibits, guided by a professional
mentor. During lunch, each of the STEM professionals spoke briefly about their own research, revealing a large array of impressive and important research from a variety of scientific fields. “I was attracted to this conference because of the opportunity for interaction between the students and the STEM professionals,” says Helena. The day ended with an “engineering challenge” to design an egg-catcher capable of preventing an egg that was dropped from 20ft from breaking on impact.

“As you can imagine, this was very messy,” says Helena, “but it was also a fantastic way to encourage collaboration between the students and mentors.” Helena’s own turning-point in science stemmed from one particularly engaging and inspiring teacher. This educator helped Helena to see that science was much more than learning from a textbook and answering exam questions. This has motivated her to be an active role model and advocate for science. “I was particularly heartened to meet several girls that were interested in pursuing careers in physics research,” says Helena. “This is encouraging for the next generation of research.”

Helena was initially concerned about whether she would be able to communicate effectively about STEM topics with the students. She found her worries dissolving immediately as she began to interact with the students. The young researchers animatedly discussed their own research goals and experiences with Helena. The high levels of quality and complexity of the research projects carried out by the students became clear to Helena as each of them described their work in turn. Many of the students had yet to complete their school research projects and were inspired by other students, the STEM professionals or the museum exhibits themselves. Helena believes STEM outreach events are critical for the future generation of researchers and every professional scientist or engineer should try to attend them at least once.

“Not only do they have a genuine and lasting effect on the next generation of researchers, but they are also extremely fulfilling for mentors,” says Helena. “For me, the most important aspect of the conference was that everyone in attendance, students and mentors alike, had a lot of fun exploring the exhibits and sharing ideas about STEM topics.” 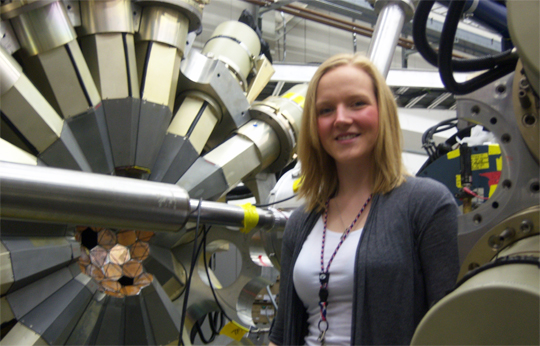 Helena David (PHY) is a postdoctoral researcher focusing on experimental studies of nuclear structure physics and nuclear astrophysics. She holds a Ph.D. in Experimental Nuclear Physics from the University of Edinburgh, United Kingdom and an M.S. in Mathematics with Physics from the University of Durham, United Kingdom. She has worked at the Defense Science and Technology Laboratory located in England, researching search and detection techniques for defense applications and security purposes using high-energy physics.

From the Winter 2013/2014 Edition of the Postdoctoral Journal.